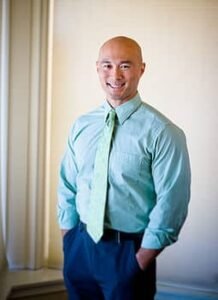 Dr. Simon was introduced to Chiropractic while studying Pre-Med in college. He was weight training as a part of his competitive swimming regime and severely injured his lower back. The injuries were so severe that he was unable to walk and had numbness down both of his legs. He sought traditional treatments for his lower back injuries.

After three months of suffering and heavy doses of painkillers, muscle relaxants, and anti-inflammatory medicines he was still in great pain. “The specialists” were discussing surgery as an option to alleviate his symptoms. On a recommendation from a friend, Dr. Simon sought the help of a chiropractor.

Thanks to Chiropractic care, in just two weeks Dr. Simon was able to go back to competing at a high level on his collegiate swim team. He heard the calling and headed for chiropractic and Physical Medicine.

He founded his first practice, Worldwide Chiropractic in the fall of 2003 with the approach that Chiropractic and Holistic medicine can be successful in treating the cause of the disease and not just blindly chase symptoms.

Following the trends in healthcare he realized there was a gap that needed to be filled and started Worldwide Integrative Healthcare to integrate all types of medical care and create a true Physical Medicine Practice.

As a world-class competitive athlete Dr. Simon has a clear understanding of how to efficiently and correctly treat many injuries. He was a ranked competitive swimmer and played water polo all through high school and college. He is also a competitive Tri-athlete, cyclist, and runner in which he has participated in numerous international competitions. He holds a third degree brown belt in Judo.

Dr. Simon is fluent in Mandarin and English. He resides on the San Francisco Peninsula with his wife, Rosalyn, and his two young children.

When he is not caring for your family at Worldwide Integrative Healthcare, he enjoys participating in competitive sports such as boxing, kickboxing, paddling, weight training, swimming, and basketball.